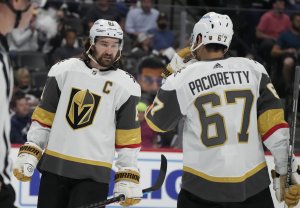 NHL Divisional odds have been released for the 2021-22 seasons ahead of puck drop on October 1. The league will revert to its previous divisional alignment, which was in place before the pandemic. Arizona is now moving to the Central with the arrival of Seattle in Pacific.

We provide the best value bets and lay out the NHL Division odds for each 32 team in 2022.

All odds at DraftKings as of August 18th

After winning the second consecutive Stanley Cup in 2020-21, the Lightning are expected to win Atlantic Division in 2021-22. The Bolts have been a powerhouse over the past few seasons, but they’ve lost a plethora of talent from their Cup winning teams. Among those who have left are Blake Coleman and Tyler Johnson. They’ll still be a powerhouse, but there’s isn’t much value given all the losses.

Your passion, heart and energy were unmatched.

Without you, the last six years wouldn’t have been the same.

Yanni, we are grateful. This was a wonderful one. @SeattleKraken.💙 pic.twitter.com/RmpjMhKnRm

The Panthers are the most value play in the Atlantic Division odds going into 2021-22. Florida finished last season with the same amount of regular-season point totals as Tampa Bay, and they did significantly better this offseason. Sam Reinhart, the Panthers’ top goal scorer, was added to their roster. Aaron Ekblad will be fully healthy. Spencer Knight, the goalie prospect, has been getting early Calder buzz.

Anything Goes in Metro

Unlike the three other NHL Divisions, there is no clear betting favorite in the Metropolitan Division. The Islanders are favored at +330, but there are four other teams with odds shorter than +600. Barry Trotz’s team came within one game of reaching the Cup Final in 2020-21, but they finished fourth in the East Division. You have to go back to 1988 for the last time the Isles have won their division.

The Capitals are tempting considering they’ve won the Metro in five straight seasons. Unfortunately,  their core is aging and on the decline. The Flyers are the wildcard after a crazy offseason that saw them land Ryan Ellis, Rasmus Ristolainen, Cam Atkinson, and Keith Yandle. Pittsburgh and Carolina have goalie concerns, while the Rangers remain weak on defense. A potential rebound year for Carter Hart puts value on Philly.

The Avalanche are the heaviest favorites in the NHL Division odds after capturing the Presidents’ Trophy in 2020-21. Colorado’s price to win the Central should come as no surprise considering they are also the favorites in the 2022 Stanley Cup odds. The Avs are stacked once again entering 2021-22 with an elite core of Nathan MacKinnon, Gabriel Landeskog, Mikko Rantanen and Cale Makar.

The moment you have all been waiting for…Oh Captain, my Captain!

Minnesota could challenge Colorado considering they finished with just seven fewer points than the Avs last season. There are too many questions marks, however, as Kirill Kaprizov is unsigned and veterans Zach Parise and Ryan Suter were bought out. If Kaprizov returns to Russia, Minnesota’s odds will significantly lengthen. Pay the steep price for the Cup favorites to win their division.

After the 2021 NHL Expansion Draft, Seattle is listed at +800 in NHL Divisional odds. They’ll look to take advantage of a weak Pacific Division that features only one true Cup contender. After finishing tied with Colorado for points in 2020-21, the Golden Knights are now legitimate division favorites. Vegas lost Marc André Fleury but they still have a strong core, led by Mark Stone and Max Pacioretty.

The GOLDEN KNIGHTS are WITHIN ONE!

Although the Kraken look intriguing as longshots, there are still reasons to be cautious. Seattle’s defense and goaltending is solid, but the offense lacks elite game-breaking talent. The Oilers are also a team to stay away from, as they’ve lost Adam Larsson and Ethan Bear from an already shaky blueline. Vegas is a safe bet, since they have a loaded lineup at every position and have won Pacific in the last two years.

Something else to consider with Vegas is they’re rumored to be interested in Sabres’ forward Jack Eichel. Both their Conference and NHL Divisional odds will go up for the team that lands the superstar. Vegas is heavily expected to win the Pacific. But, these odds could rise further once puck drop. Given the uncertainty surrounding Edmonton and Seattle, the Golden Knights offer solid value.

Brady is a passionate hockey fan, sports writer and has more than five years of experience in digital media. Additionally, he holds a degree as Broadcast Journalism. His work has been published in outlets like ESPN, CBS Sports and Yahoo! Sports and Fox Sports.

Brady is a passionate hockey fan, sports writer and has more than five years of experience in digital media. Additionally, he holds a degree as Broadcast Journalism. His work has been published at outlets like ESPN, CBS Sports, and Yahoo! Sports and Fox Sports.