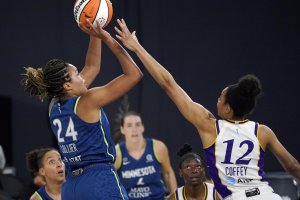 The WNBA begins a new week and the last full week of August with a quartet of games throughout the league on Tuesday, Aug. 24th airing on ESPN’s family of networks.

Odds as of Aug. 24th at FanDuel

Playoff Seeding on the Line

In all four games on the schedule, they all include have important playoff seeding implications on the line now with around 10 games left to play before the playoffs tip off in late September.

Seattle, Las Vegas and Connecticut, three teams tied atop the league standings, are trying to fight for not only the top spot in the standings, but also the two seeds in the postseason. The top two seeds in the playoffs receive a double-bye to advance right to the semifinals, while the third and fourth seeds only get a first-round bye into the single-elimination second round.

Outside of those three teams, Minnesota, Chicago and Los Angeles are currently in playoff positioning, although they are all still trying to battle for the best possible seeds in a tight race. For Washington and Atlanta, they are both on the outside of the playoffs looking in, but are trying to put together a late-season run to inch towards a lower seed in the postseason.

There is plenty yet to play out for the rest of the regular season, and Tuesday’s slate of games is another important day for all eight teams playing in regards to their playoff hopes and positioning.

All four games on Tuesday’s schedule will be entertaining to tune in to, but there are a few that stand out from the rest.

The first game is the contest between Seattle and Minnesota at 7 p.m. ET on ESPN2 in Minneapolis. The Storm come into the game at 18-7 overall and winners of two in a row, while the Lynx enter at 14-9 on the year and winners of eight of the last 10 games.

Seattle has owned the season series against Minnesota thus far, winning a pair of games in May. With both teams back to full strength and still fighting for the best possible playoff seed and likely a top four seed, there will be a lot riding on the game at Target Center.

Tune in to tomorrow’s @minnesotalynx home game against Seattle at 6:00 p.m. CT on ESPN2 pic.twitter.com/bWjBTx1vZB

The second game to watch for is the battle of two of the top teams in the league when Las Vegas faces Connecticut at 7 p.m. ET on ESPN3. The Aces and Sun are tied atop the WNBA standings with identical league-best records of 17-6 overall.

With Tuesday’s game being the third and final matchup between what could be a preview of the WNBA Finals, Connecticut owns a 2-0 season series advantage over the Aces to this point in the year.

As both teams try and get into the drivers seat for the top spot in the WNBA while putting themselves in a good spot to claim a top two seed, this game will be important for both sides.

Not only will Tuesday’s slate of games be fun to follow based on what’s riding on the line of each game for all eight teams playing, but it offers a lot of intriguing betting options along the way as well.

When it comes to predictions for who might come out on top in each game, don’t be surprised to see Seattle, Chicago, Connecticut and Los Angeles come away with wins on the night.

For the best bet, take a look at the game between Los Angeles and Washington, where the Mystics are 2.5-point favorites at home. This will be a close game, but the Sparks have been one of the hottest teams in the league winning four straight, so they should be able to cover that spread.