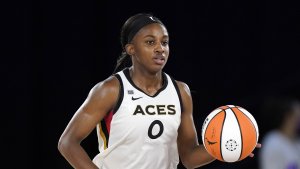 As August stats to near a close and September arrives, the WNBA regular season is starting to come to an end with just a few weeks remaining in the schedule before the postseason begins. On Thursday, Aug. 26th, all three games on the schedule hold playoff implications as the teams taking part in the tripleheader fight for seed positioning.

Featured in the trio of contests on the schedule on Thursday, the Las Vegas Aces take on the Atlanta Dream at 7 p.m. ET on NBA TV, the Los Angeles Sparks face the Connecticut Sun at 7 p.m. ET on WNBA League Pass and the Dallas Wings play the Washington Mystics at 7 p.m. ET on Amazon Prime Video.

In all three games, there is at least one team in each game that will try and take their game to improve positioning for the postseason, which tips off on Sept. 23rd.

In the first game, Las Vegas and Atlanta are on opposite ends of the WNBA standings with the Aces tied for second place and the Fever trying to stay out of last place. Las Vegas enters at 17-7 overall while tied with Seattle (18-8) for second place, while Atlanta comes in at 6-18 and a half-game ahead of Indiana (5-18) for last place.

In the second contest, Los Angeles and Connecticut are both currently playoff teams in the thick of races for seeds. The Sun have are the top team in the WNBA at 18-6 overall, holding a one-game lead over both Las Vegas and Seattle for No. 1 spot. The Sparks are tied with Dallas (10-14) and New York (11-15) for the seventh and eighth seeds, which are the final two playoff spots.

In the third and final game, Dallas and Washington are both in a fight to simply make the playoffs. The Wings are tied with New York and Los Angeles, but are just a half-game ahead of Washington (9-14) for completely falling out of the postseason. The Mystics are trying to put together a late run at grabbing one of the bottom seeds and a win on Thursday could help greatly in those efforts.

All three games will be worth tuning into on Thursday night, based solely on the playoff implications that are on the line, but the one that stands out from the rest is the contest between Dallas and Washington at 7 p.m. ET on Amazon Prime Video.

This game has arguably the most on the line and features two evenly-matched teams fighting to simply reach the playoffs. The Wings are tied for the seventh and eighth seeds, while the Mystics are a half-game out of the playoff picture trying to make the jump into the field with a win.

About a week or so ago, Washington had the welcomed comeback of WNBA star Elena Delle Donne take place for the first time since 2019, an addition that has certainly helped in its pursuit of making a late push towards the playoffs. However, Tina Charles, who has been leading the Mystics all year long, will be out for Thursday’s game with a left gluteal strain.

On the other side of the things, Dallas is one of the more entertaining offensive powers to watch in the WNBA, ranking near the top in the league in multiple offensive categories. That alone will be worth tuning into and watching in the game along with watching the talent of Arike Ogunbowale try and rise up once again to lead her team to victory.

As each day passes leading up to the conclusion of the regular season, every game continue to become more and more important until the postseason arrives. On Thursday, that is yet again the case with all games important ones for teams playing.

As far as predicting who will come out on top, let’s go with Las Vegas, Connecticut and Washington pulling out victories. For the best bet of the night, look at spread for the Los Angeles and Connecticut game, where the Sun are 11.5-point favorites. The Sun should win the game, but the Sparks have been playing well and should be able to cover that spread to keep things somewhat close.